Cairn Rodrigues is back on the Red Carpet today to talk about why colour plays such a major role in The Last Prospector. 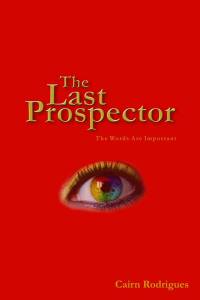 What’s your favorite color?  If you are like the overwhelming majority of the world, including me, your answer is blue.  There are some rebels out there, some color mavericks bucking against the norm, and I salute them.  With so many amazing colors to choose from, someone is bound to pick aubergine eventually.

Color is a huge factor in our lives, we are practically programmed to be alarmed by red hues and soothed by the blues.  Most traditions and holidays worldwide are affiliated with certain colors, such as white for brides and orange for Halloween.  In my first novel, The Last Prospector, colors define the world of Solstice and, in many ways, the people who live there.

When I set out to write my fantasy series the Song of Solstice, much thought was given to context.  I knew I was going to spin a fantastic yarn requiring people to jump into an unfamiliar world, so some universal touchstones were important.  Using color for that context, primarily the seven colors of the visible spectrum, was my ultimate choice.  Grabbing my old high school friend Roy G. Biv by the hand, we built the template for Solstice.  Truthfully, once Solstice was organized by color, it created itself with spectacular results.

Solstice is a world of seven tiers, each tier aligned with a specific color and each color spawning a corresponding culture.  The tiers are all relatively equal in size and run the course of the spectrum starting with red Roja in the south to violet Vyoletta in the north.  Each tier has unique terrain, such as the desert of the orange tier and rainforests in the green.

Naming the tiers once they were established wasn’t as easy.  There is a dizzying array of human words for all the colors, shades and hues that define our lives.  I spent many hours doing searches of color names in languages other than English and the origins of current English words.  There are many instances in the story where actual color names are used, such as Geoluread.  It’s an archaic word for orange, more precisely it’s the words for yellow and red pushed together.  A great word like that shouldn’t be altered or ignored, so it became the name for an important stronghold in the orange tier.

Digging into the etymology of color names was a real treat though, all that incidental research added a lot of depth and flavor to the cultures they spawned.  My favorite find was learning indigo correlates to rigid social hierarchy after creating the caste system of the Yndigon tier.  Perhaps it was a universal theme I already knew subconsciously, it’s hard to be sure, but it was one of many natural fits where color was concerned.

Vibrant color is splashed liberally around Solstice and I hope it’s a place you will consider visiting.  The Last Prospector is the entrance to a new world, a place where the improbable is likely and treasure hides in the most unusual places.  It’s a world of bold colors, colorful characters and even horses of a different color.

So, please allow me to ask the same question a different way.  If you could live in a color, which one would it be?

Thank you very much Cairn for the post – my favourite colours blue and yellow but I think if I had to chose it would have to be a mauvy blue – not too dark.

Cairn can be found at the following: